UPNMG Worried Over Migration Of Ghanaian Nurses, Midwives To UK

UPNMG Worried Over Migration Of Ghanaian Nurses, Midwives To UK – The Union of Professional Nurses and Midwives, Ghana (UPNMG) has expressed concern about the seeming migration of Ghanaian health workers, especially nurses and midwives, from the country to the UK to work.

The union, in a communiqué after a 5-day conference in the Bono regional capital, Sunyani said the development is due to the poor conditions of service of health workers in the country.

The group further indicated that it will in the coming days engage with its employers to find a way to reduce the occurrence.

It further pledged to introduce new welfare packages for its members to cushion them, noting that, the union has already set in motion a scholarship scheme for members across the country to pursue nursing and midwifery-related courses within the country.

It said it is considering an auto loan, housing and land scheme for members to improve upon the living conditions of its members.

“Leadership indicated that they have registered The UPNMG fund to which every member contributes a minimum of GH¢50, as a Fund Management Company. The UPNMG FUND LBG will among other things serve as a mutual fund that will be properly and professionally managed, leading to higher dividends for members.”

“Interest accrued on contributions of members will reflect on the fund’s web-based portal,” it added. 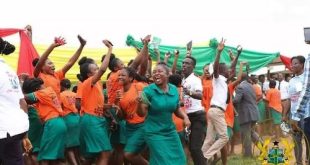 Ghana To Trade Nurses For Cash With UK; State To Earn £1,000 Per Nurse