‘Threats To Vote Out NPP Don’t Frighten Me’ – Akufo-Addo

‘Threats To Vote Out NPP Don’t Frighten Me’ Akufo-Addo – President Akufo-Addo has said that he is not threatened by calls for the New Patriotic Party (NPP) to be voted out of office in the 2024 election.

He said such threats do not frighten him.

The President made this comment in an interview on Kumasi-based OTEC FM on Monday. His comment was in response to a question posed by host of the programme regarding what he made of threats by the people of Kwabre against the NPP in the 2024 election due to poor road infrastructure in the area.

Reacting to the threats President Akufo-Addo replied, “no problem. I am saying people make those kinds of threats; me they don’t frighten me.”According to him, although he understands the masses may support a party with an expectation, he, however, does not see the need to threaten the government if it fails to deliver.

“If you decide to vote for the NDC in the general election, it is your choice and that is not my problem. No one will force you to vote for someone,” he stated.

He, however, admitted that he has been mandated with a responsibility to construct roads and will definitely execute it.

Previous Patapaa Has A Talent Of Making Hit Songs; He Is Unique – Flowking Stone
Next There Is No Basis To Sack Ken Ofori-Atta – Prez Akufo-Addo 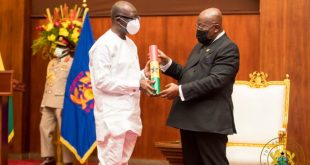