Food For Thought Coming Soon On Sompa 93.1fm. Watch Out. Thank You

The Radio and Television Program (RTP) award winning broadcaster who has raised the Kesben FM morning show from a low-level listenership to sought-after show, and even taken it to international levels from the beginning of their television channel is said to have had few challenges with the management of the media house.

Congratulations Omanhene on your new job! 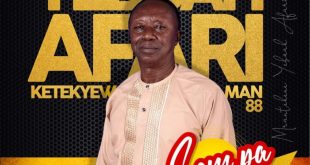