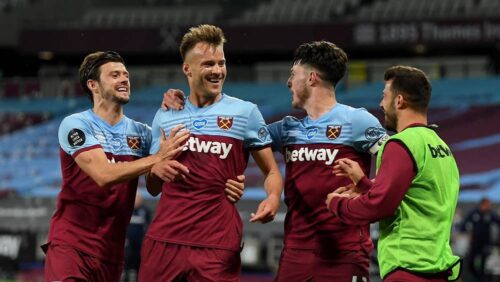 West Ham stunned Chelsea for the second time this season, beating the Blues 3-2 on Wednesday night.

The result means the Hammers have done the double over their London rivals for the first time since 2003, having also beaten them in December.

It also gives them a real chance of avoiding relegation this season, moving three points clear of the bottom three.

Chelsea did take the lead at the London Stadium when Willian converted a penalty after Christian Pulisic was fouled inside the area.

That came moments after massive VAR controversy when the technology ruled out a West Ham goal at the other end.

Tomas Soucek poked home from close range, but it was disallowed as Michail Antonio was judged to have been interfering from an offside position.

But after having a goal disallowed and conceding one at the other end, West Ham didn’t just roll over as they easily could have done.

They pulled level on the stroke of half-time when Soucek scored from another corner – this time, the goal stood.

It was the hosts who started the second half with a flourish too, completing their comeback in the 51st minute.

Antonio smashed home from close range after a clever cut-back from Jarrod Bowen.

West Ham were looking good for a massive three points until Willian curled a fantastic free-kick past Lukasz Fabianski to make it 2-2.

With just under 20 minutes to play, Chelsea went all out for the win. In truth, the visitors didn’t come close to finding a winner, but instead, were stung on the counter-attack in the 88th minute.

Andriy Yarmolenko calmly finished past Kepa, having been played through on goal by Antonio.

The result means West Ham take a massive step away from the relegation zone, while Chelsea blow the chance to leapfrog Leicester City into third in the Premier League.

Forget About Messi — Font To City