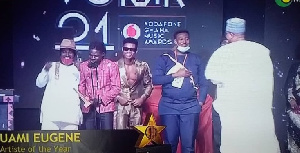 #VGMA21: Kuame Eugene Grabs Artist Of The Year – Kuame Eugene, has been delegated Artist of the Year at the 21st Edition of the Vodafone Ghana Music Awards.

The Highlife performer was designated close by any semblance of Sarkodie who has won the honor previously, Medikal, Kofi Kinaata and Diana Hamilton.

Having conveyed an incredible exhibition during the night, Kuame Eugene expressed gratitude toward God, his supervisor, Richie Mensah and his fans for supporting all through his music profession.

Kofi Kinaata on the night won the Songwriter of the Year grant, making it his third in succession while Cina Soul won Best Video of the Year Award.