Sarkodie Opens Up On Alleged Assault On His Manager 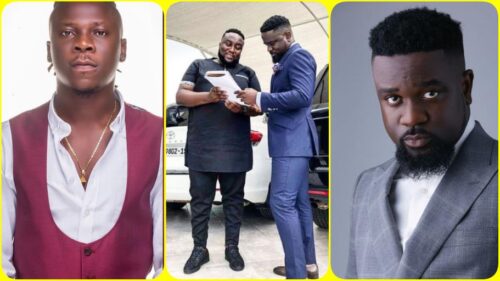 Sarkodie opens up on alleged assault on his manager – Sarkodie has finally opened up about the events that led to a confrontation between his manager Angel and Stonebwoy prior to the Black Love Concert.

Although he did not divulge any specific details on the misunderstanding, the rapper admitted that Stonebwoy did hit his manager.
Speaking at a virtual Press Conference on his official Facebook page monitored by GhBase.com, Sarkodie explained that, he knew Stonebwoy’s actions against his manager was out of provocation and misunderstanding and not a deliberate act.

“I have been in this industry for a very long time and I understand the dynamics when it comes to artistes. I know everyone has different temperament and sometimes things get out of hand…I know Stonebwoy actions wasn’t deliberate that’s why we settled the issue and he still performed,” Sarkodie stated.

“We are both big artistes in Ghana with large following and I know that Stonebwoy’s management wouldn’t want to do anything to hurt the brand. It’s the same with me, my wife, my manager and all the members of my team know me very well, they know that I easily let go of issues especially when I feel it’s irrelevant and wouldn’t add anything to the Sark nation brand…. Stonebwoy is my brother and we have both worked hard to get to where we are…… and I know what happened could have forced him to drive off and boycott the concert…but after we spoke in a more calmer tone, we settled the issue amicably,” Sarkodie added.

Sarkodie went ahead to apologize to his fans for all the challenges they had to face during the live concert.