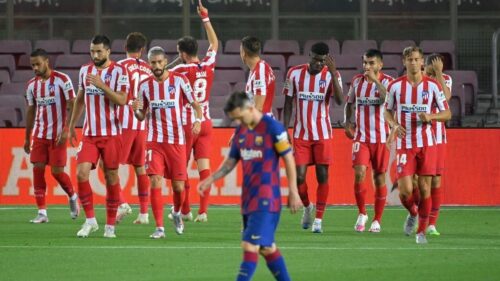 Messi Scores 700th Goal As Barcelona’s Title Hopes Dented – Barcelona could soon find themselves four points behind LaLiga leaders Real Madrid after being held to a 2-2 draw by Atletico Madrid.

Barcelona’s LaLiga Santander title hopes took another major hit with a 2-2 draw against Atletico Madrid on Tuesday night at the Camp Nou.The home side enjoyed a good start thanks to a Diego Costa own goal, but that was canelled out by Saul’s penalty conversion. Lionel Messi made history by scoring his 700th career goal with a Panenka from the penalty spot, only for Saul to play spoiler again with his second penalty of the night.

For Barcelona, it will only increase the pressure on manager Quique Setien, whose side are one point behind leaders Real Madrid in the table. On the other side, it was another good result for Atletico, who were led by Yannick Carrasco, as the Belgian won both penalties on the night.For the second match in a row, Antoine Griezmann found himself starting on the bench, while youngster Riqui Puig was yet another inclusion into Setien’s starting XI.

Meanwhile, Atletico boss Diego Simeone opted Joao Felix to the bench.The first chance went Atletico’s way with a Carrasco freekick that almost reached the extended heads of Jose Maria Gimenez and Costa, but Barcelona would be the ones to break the deadlock minutes later.After first deflecting a Messi freekick out for a corner, Costa would misplay the Argentine’s in-swinger and Atletico goalkeeper Jan Oblak was helpless to stop the deflection off the veteran forward’s leg for a 1-0 Barcelona lead.

Costa’s night went from bad to worse when he failed to convert a penalty kick after Arturo Vidal took down Carrasco with a lazy challenge in the area, but the Brazilian-born Spain international was given a reprieve, as VAR ruled that Barcelona goalkeeper Marc-Andre ter Stegen had come off his line early to smother the spot kick. Saul then assumed penalty duties and coolly slotted in to pull Atletico level 1-1.For much of the rest of the half, the Atletico defence bottled up the Barcelona attack, but Puig was lively in trying to break down the Simeone resistance and the youngster won a free-kick that Messi almost scored on, if not for a last-gasp parry from Oblak.Soon after the re-start the penalty gods would favour Barcelona when Hernandez Hernandez pointed to the spot after Felipe clipped Semedo just inside the area. 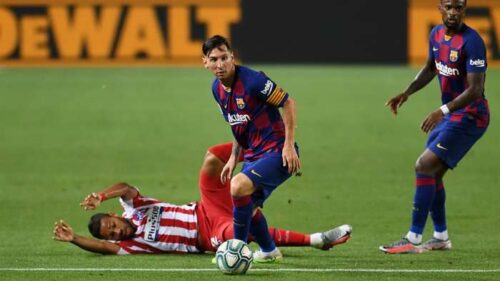 Messi stepped up and scored his 700th goal with a Panenka to give Barcelona a 2-1 lead.When going forward, Atletico were a threat with pinpoint precision and an excellent build-up almost ended with a goal when Costa snapped a header that spun just wide.Carrasco was an absolute headache for the right side of the Barcelona defence and the Belgian dangerman won a second penalty when he was nicked from behind by Semedo and Saul managed to squeeze in the penalty off of Ter Stegen’s fingertips to make it 2-2.Setien went to his bench for the final half-hour of play, bringing on Sergi Roberto for Rakitic, but there was still no sign of Griezmann as time ticked into the final 15 minutes.

Instead, Ansu Fati was called on, replacing Busquets with little time left.Simeone was still keen to get a full three points and brought on Joao Felix, Alvaro Morata and Vitolo in hopes of a late winner, but it was Thomas Partey who almost stole the show with a late strike that blazed wide.Finally, with the start of stoppage time, Griezmann was given his chance, but it was too little too late for a Barcelona side that never troubled Oblak in the late going and had to bid adieu to another two points.