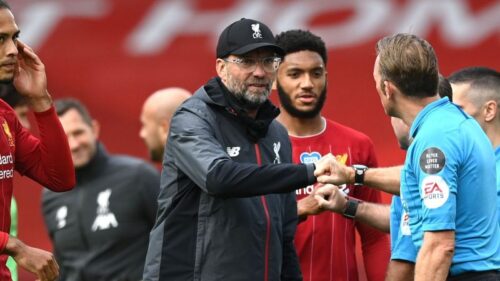 The Reds moved on to 89 points after second-half goals from Sadio Mane and Curtis Jones secured a 2-0 win.

Liverpool need 12 points from the last five games to beat Manchester City’s record of 100 points in a season.

“We’ve always focused on the game and that won’t change,” said Klopp.

“We didn’t come here and have the numbers we have because we thought about breaking records.

“Hopefully in the future, when the record ends or the season ends, I can start thinking about it.

“If we can do something special it is great but we really don’t think too much about it.”

As well as breaking the record for most points in a season, Liverpool can also match Sunderland’s 128-year-old record of winning every home league game in a season.

This was Liverpool’s first game at Anfield since becoming Premier League champions and the win ensured they bounced back after being beaten 4-0 by Manchester City on Thursday.

However, they were far from their best with the opening goal coming from just their second shot on target, Mane lashing Naby Keita’s cross in via the underside of the crossbar.

Until then Villa had looked like earning a precious and unexpected point and had even had chances to go ahead themselves, with Alisson parrying away Anwar el Ghazi’s fierce shot early in the second half.

Mane’s strike clearly deflated the visitors and they fell further behind just before full-time when Jones celebrated signing a new long-term deal by volleying home his first Premier League goal.

Klopp added: “Aston Villa were fighting with all they had and it makes life uncomfortable.

“I like it, it was not a brilliant performance but it was a good performance that gets us three points.”

Defeat for Villa means they remain in the relegation zone in 18th, one point adrift of safety and still searching for their first win since the Premier League restarted.