Jane Naana Should Compare Herself With NAPO – Ken Agyapong 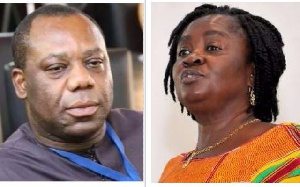 The running mate of John Dramani Mahama for the 2020 surveys, has on a few stages been contrasted and the Vice President of Ghana, Dr. Mahamudu Bawumia.But speaking on her appointment for the first time, Kennedy Agyapong said Jane Naana Opoku-Agyemang cannot be compared to Dr. Bawumia but should be compared with the current Education Minister.

“We will bring her record. When she became Education Minister. You cannot compare the woman to the Vice President because he’s the sitting Vice President who has done so well. If you look at the history of Ghana and all the old Presidents we have had, it’s only President Akufo-Addo who has given the Vice President chance to shine and you know Dr. Bawumia is intelligent so he has shined.

So now when you come with a woman and you think the woman will brighten your political fortunes you are lying, you cannot win. We are not comparing Jane Naana to Bawumia, we are comparing her to NAPO. So you have to look at what NAPO has done as Education Minister then you assess what she did as Education Minister then you can tell if she will be a competent Vice President to help Mahama.

Mahama is a blockheaded person and he’s gone to bring this woman. From next week we will dissect all the issues in politics,” he said on Accra-based Net2TV