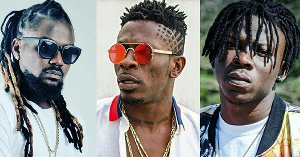 I’m Disappointed In Shatta Wale And Stonebwoy Samini – Samini is unhappy over a Shatta Wale and Stonebwoy planned clash and he is expressing his genuine thoughts. As indicated by the ‘Linda’ vocalist, the musical battle slatted between the other two dancehall acts ought to have occurred among himself and Shatta Wale. “So in that case who am I also going to clash because I am still in here,” he said.

Samini clarifies that Shatta began the ‘beef’ thing with him, in this way, he should complete it with him before proceeding onward to dole out the retributions with someone else. “I still have issues with people, especially if people have also come out to say everything they said about me was a lie,” he said.

Samini proceeded with that “So we need to also have a face to face one on one for him to let me know that it was all jokes let’s not take it seriously”. The High-Grade family boss also expressed disappointment in accepting the challenge without calling on him.