I Fired The Gunshots – Hawa Koomson 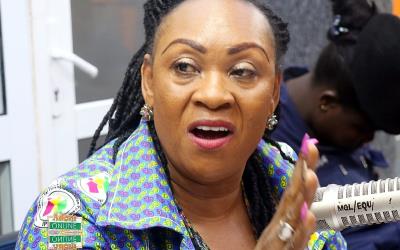 I Fired The Gunshots – Hawa Koomson – Mavis Hawa Koomson, the MP for the Awutu Senya East, says she fired a gun at a voters registration centre in her constituency.

“None of my men had guns on then when we got to the centre. I fired the shots myself,” the MP, who is also Special Development Initiatives Minister, disclosed to Adom FM.

She included that the gunshot was a method of securing herself at the registration centre since her police escort had not begun working that day.

The MP showed she went to the spot since she heard her opponent had transported individuals from different spots to the registration centre.

“I’m a Member of Parliament, I need to protect myself. It was at dawn, my police escort had not started work yet. So that is a mechanism I have adopted in his absence,” she said.

On Monday the Kasoa Peace Town Top Hill Down polling station was shut somewhere near the authorities of the Electoral Commission after firearm employing men raged the premises.

Some armed men of the MP numbering around 15 showed up at the enrollment base on 8 am and attempted to sack some planned voters.

The NDC Parliamentary Candidate Naa Koryoo Okunor then blamed the sitting MP for being the driving force.

In the interim, the police say four people have been captured regarding the occurrence.