I Am Happy At PSG Neymar – Brazilian footballer, Neymar Jnr has spoken about his future. According to the player, he is very happy in Paris and has not thought about leaving PSG.

He said this after helping his team into the knockout stages of the Champions League with a 5 – 1 win over Istanbul Basaksehir.

“I am very happy here in Paris. I am very happy at the club, with my teammates. The idea of leaving does not cross my mind. We have to discuss. We have a very good relationship and see what will happen in the future”. he said.

Neymar scored hat-trick and it’s his third in his career in the Champions League. He also becomes the only player to reach 20 Champions League goals for two different teams. 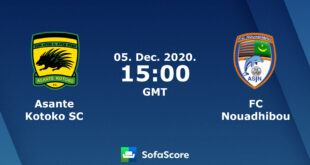 Asante Kotoko vs FC Nouadhibou Has Been Cancelled