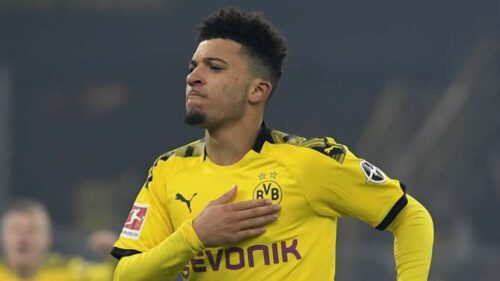 Sancho, 20, has been linked with a move away from Borussia Dortmund in the transfer window and the Premier League is seen as a likely destination with Manchester United and Chelsea potential options.

Sancho left the Etihad Stadium in the summer of 2017 without making an appearance for the first team and, despite having the option to match any bids that came in for him as part of his move, Guardiola has no interest in re-signing the England international.

“He decided to leave, why should he come back?” the City boss said ahead of Thursday’s clash with new champions Liverpool.

“When he decided to move to Dortmund it’s not that he’s going to come back. It would make no sense. If he wanted to leave, I’d say he doesn’t want to come back.

“It’s part of the process, we’d like to stay with the players of the last 10 years to be eternal but we grow in years and we have to replace them with new players.”

Guardiola accepts that he will have to make changes in his squad with a centre-back a priority after the failure to replace Vincent Kompany when he left last summer.

Captain David Silva is also leaving at the end of this season while Fernandinho and Sergio Aguero are entering the final 12 months of their contracts, although Guardiola hopes the Argentinian striker will sign an extension.

Asked whether he will need to rebuild, Guardiola said: “Not for the lack of quality but the absence of Vinny, David… Sergio has one year left, I don’t know if he’ll extend or not.

“Some players have to be replaced. It’s not a disaster thing, it’s part of football for their age and normal circumstances.

“It happens in other clubs and when players decide to leave, Jadon Sancho and Leroy – especially Leroy. We cannot do anything else, as a club, if guys don’t want to stay they have to leave, we are not getting the best if they are not happy here.

“This is the first thing and the second is with the age. It happens at clubs around the world, you never can be eternal. We have to accept that and try to take the right decisions to maintain the level that we have.”

Previous Zidane: Real Madrid Have Won Nothing Yet
Next Breaking: Akufo-Addo Awards Amnesty To 794 Detainees

Napoli To Rename Stadium Their Stadium In Memory Of Maradona