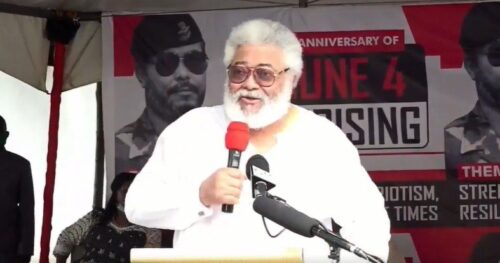 Speaking to Kwaku Sakyi-Addo on Asaase Radio’s Sunday Night, the former president indicated that probity and accountability came naturally under his military regime rather than a multi-party regime with a parliament when everything has to be given approval before it is implemented.

“It was easier in one respect. The level of integrity, accountability, etc., came naturally; not from me; from all of us. It was something I think humanity; our people yearn for because it gives you peace of mind and I think it was something we’ve been craving for a long time,” Rawlings explained.

He continued: “One day, I’m going to tell this country that when we had to go multiparty, the truth was that the people didn’t want it. The people were living themselves; they didn’t have to look back at what the law says. It was a beautiful time.”

When Sakyi-Addo asked whether he wanted multiparty democracy; he said that he didn’t want it as a president and still didn’t want it even now as a former popularly elected president.

“Look at what it does; the division, animosity, etc., our people take advantage of whatever.”

Rawlings argued that the military regime didn’t make him dictatorial because by his nature, he is a very “consultative person”.

“On top of that, how much do I know, to think I can inflict solutions on people, no! Besides, I’ve always believed in the beauty, the great resilience, of the Ghanaian, provided you can create the platform to come up with their best. And I think this is something we did with the PNDC,” he observed.

“I will always take credit for creating an atmosphere that brings the best out of people. I didn’t chair PNDC meetings because I didn’t want my colleagues to feel, I’m being obstructive. So, I sit in the meeting just like any one of them.”

He mentioned P.V. Obeng, Iddrisu Mahama as people who chaired cabinet meetings every now and then. Rawlings agreed with Kwaku Sakyi-Addo that P.V Obeng was his de facto “prime minister”.