The comic actor was arrested on Sunday and put before court on Monday.

This was after he was initially arrested for allegedly firing a gunshot in public last week.

Funny Face is seen in a handcuff seated in between two police officers in a police vehicle as per a video he posted today.

He indicated in the post that he was taken to the police cells on Sunday and put before the Ofaakor circuit court. 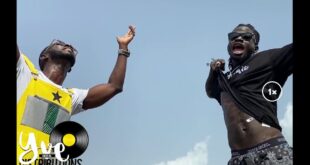