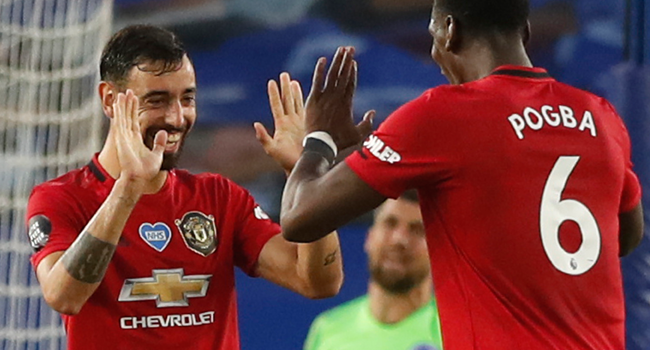 The Portugal midfielder scored either side of half-time, after teenager Mason Greenwood had opened the scoring, to leave United two points behind fourth-place Chelsea in the race for Champions League football.

Ole Gunnar Solskjaer’s side dominated the game to stretch their unbeaten run to 15 games ahead of back-to-back games against two teams in the relegation places, Bournemouth and Aston Villa.

Having stretched their unbeaten run in all competitions to 15 games, United climbed back into fifth place on 52 points from 32 games, two behind fourth-placed Chelsea who have a game in hand and ahead of Wolverhampton Wanderers on goal difference.

The result and the performance pleased manager Ole Gunnar Solskjaer, who praised his team after United celebrated their first league win at Brighton since 1982.

“It’s a joy to watch them when you see them express themselves like that,” the Norwegian told the BBC.

“The confidence comes from performances and knowing they’ve done the right things leading in to the restart. They worked hard during the lockdown and we know we have loads to play for.

“The third goal was a great team goal. To see so many players sprinting forward to get on the end of it was fantastic. A great finish by Bruno Fernandes.”

Solskjaer added to Sky Sports: “Mason’s first goal was brilliant and he played fantastically. He’s a special kid, we know when he gets faced up he looks dangerous. His link-up play was great today.”

United dominated from the start and Fernandes hit the post with a rasping first-time shot from 20 metres before 18-year-old Greenwood fired them ahead in the 16th minute from a jinking solo run capped by a crisp low shot inside the near post.

Fernandes made it 2-0 with a deflected effort in the 29th following a superb build-up, with Luke Shaw piercing through on the left flank before the ball eventually fell to the Portugal midfielder on the edge of the penalty area.

United scored a high-quality third goal shortly after the break as Nemanja Matic released Greenwood with a searching long ball and the forward delivered an inch-perfect cross for Fernandes to volley home superbly from 10 metres.

Substitute Daniel James missed a chance to score United’s fourth in the 86th minute when he had only Mathew Ryan to beat but the home keeper did well to deny the Wales winger.

United are next at home to relegation-threatened Bournemouth while Brighton visit bottom team Norwich City on Saturday.