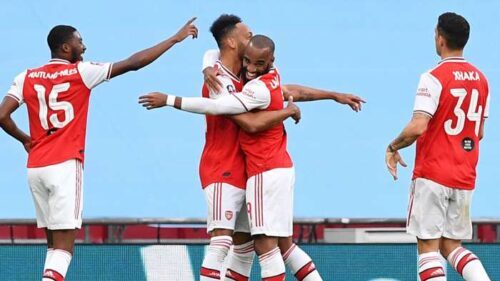 Aubameyang Double Sends Arsenal To FA Cup Final – Mikel Arteta’s side arrived at Wembley with next to no-one giving them a chance against Manchester City, yet it’s the Gunners and not Pep Guardiola’s men who will return next month for the final after a fabulous 2-0 win.

This was a victory that came straight from the training ground, one in which every single player played their part. Fortune may have favoured Arsenal when they saw off champions Liverpool in midweek, but they deserved everything they got at Wembley on Saturday evening.
Tactically, Arteta got it spot on. It was a win which highlighted why, after the dark days of the first half of the season, there is real cause for optimism now in north London.

Arteta, who left his job as Manchester City assistant manager to succeed Unai Emery at Arsenal in December, now has a chance to mark his first season in charge with major silverware when they face Chelsea or Manchester United in the final on 1 August.

The match-winner was Pierre-Emerick Aubameyang, the world-class striker Arsenal are desperate to secure on a new long-term contract, as he ruthlessly exposed City’s defensive deficiencies.

Aubameyang had already shot straight at Ederson with one clear chance but there was no escape for City after 19 minutes when he showed great technique to steer home Nicolas Pepe’s cross with the outside of his foot at the far post.

City dominated possession after the break but squandered their opportunities and Aubameyang made them pay once more in the 71st minute when he raced away on the angle to slide a composed finish under the keeper.

City tried to raise themselves but couldn’t. Cross after cross came in, but Luiz dealt with everything that came his way and anything that bypassed the Brazilian was collected by Martinez.

City were well beaten in the end. Out-fought on the pitch and out-thought off it. This may be Arsenal’s worst league season in 25 years, but for the first time in a long time they look like they have a plan.

They hit rock bottom during the final weeks of Unai Emery. The long journey back towards the top looks like it has begun.