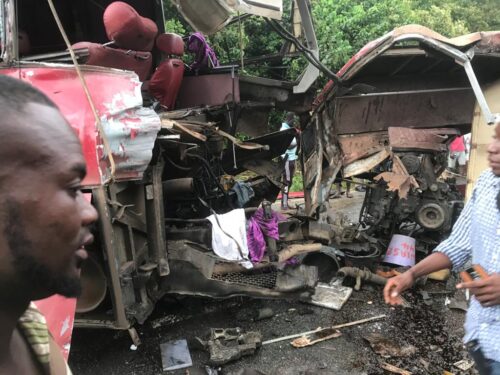 11 Die In Obuasi Crash – Eleven people died and dozens wounded after a commercial Sprinter bus collided with a fully loaded passenger Ford bus on the Dunkwa-Obuasi highway on Monday night.

The crash happened at about 9:30 p.m. at Anwona, near Obuasi, about 55 kilometres away from Kumasi.

It took rescuers made up of fire and police officers more than an hour to get all the passengers out of the 207 Sprinter bus with registration number GT 397 – 14 that was travelling from Dunkwa-on-Offin to Obuasi, as well as the Ford bus registered GE 58 – 13.

According to him, the cabbie, who was the only occupant, sustained injuries and was rushed to the AGA Hospital, where some other injured passengers were earlier taken to.

Six of the people, including the driver of the Ford mini bus, died on the spot while five others later died at the hospital.

Reports say a heap of sand that had blocked half of the busy road might have caused the tragic accident.

The Sprinter bus driver, reports indicated, suddenly saw the heap of sand blocking his lane and, therefore, attempted not to run into it, forcing him to veer to the other lane.

Unfortunately, the Ford mini bus, which was said to be running at top speed, crashed head-on with the Sprinter bus, resulting in the deaths.

Stephen Sekyere, an eyewitness, disclosed to DAILY GUIDE that the impact of the crash was loud that it attracted scores of curious people to the scene, with blood traces at the accident scene.

According to him, most of the passengers in both vehicles, including females, were trapped in the buses which got mangled after the collision.